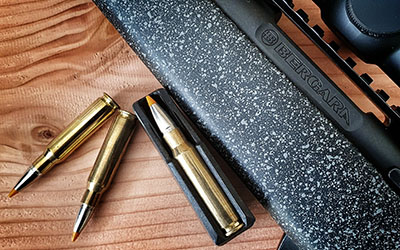 The red stag is Europe’s toughest hooved big-game animal pound for pound. Mature stags have heavy bones, dense muscle and are pumped with testosterone and adrenaline when prime hunting time for them takes place every September. So before you start planning your hunting trip abroad for one of Europe’s majestic game animals, take this blog for what it is, educational purposes to maybe help you make a decision on what rifle you need to bring along on your stag hunt.

In Europe there are rules and regulations set in place for a reason on what is considered a legal cartridge to hunt this larger species of red deer. Putting down a mature stag cleanly takes a good cartridge with a good bullet. Shooting a stag other than a broadside shot requires a bullet that will penetrate deep enough. Most guides in Europe would prefer to see their hunter shoot at least a 7mm diameter bullet as a minimum, .30-caliber and larger, especially magnums with tough, heavy bullets are preferred. 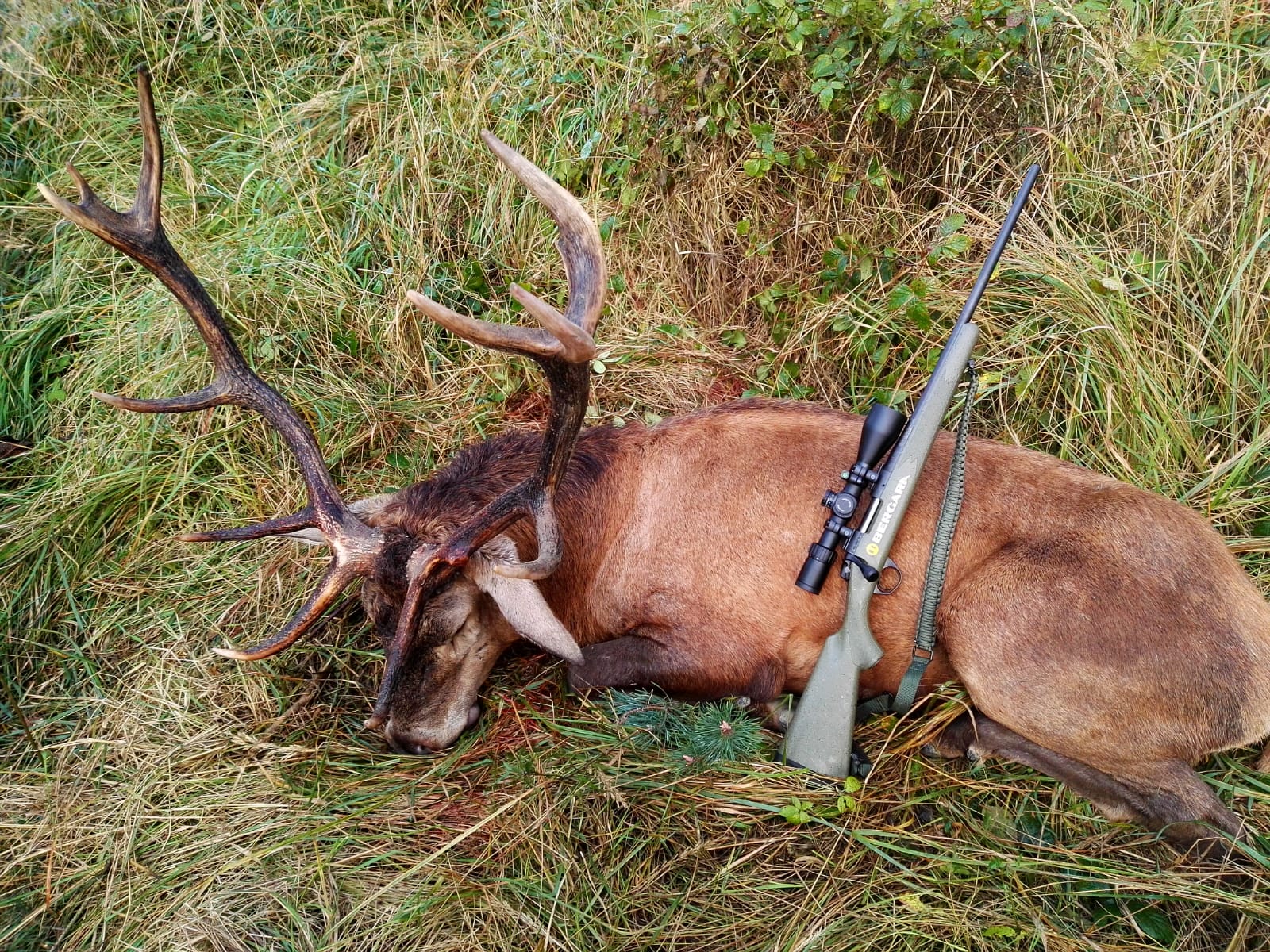 Reason why most European hunting regulations governing the rules for hunting larger deer species requires that hunters meet these requirements. Can you kill a red stag with a .243 or a .25 caliber bullet, sure you can, but you got to take into consideration that every game laws won’t be the same dependent on where you plan to hunt in Europe. In Germany, it’s required that you need to have at a minimum a 6.5 diameter bullet producing at least 2,000 Joules (1,475 ft/lbs) of energy at 100 meters to legally hunt them, whereas some other places requires a 7mm diameter projectile at a minimum. It’s a simple fact that a more powerful cartridge does provide a bit more room for error than a smaller, less powerful cartridge, and that could be the difference between bringing your trophy home with you and having a lost animal.

A good bullet will provide the terminal performance necessary to punch through the heavy bones and thick muscles of a big stag to reach the vitals from a variety of shooting angles. What is more important is that you know your rifle and that you can shoot it well. You might only get one opportunity at a stag of a lifetime and he might not present a perfect broadside shot. However, an appropriate cartridge with good penetrating bullet will give you some more options on the shots under realistic hunting conditions.

With all that in mind, my goal with this article is to provide you with a couple of good recommendations on selecting the ideal caliber for hunting red stag, whether you’re a first time stag hunter or it’s your fifth time, just keep in mind that this is not an all-inclusive cartridge list. Hunters go afield each year with other cartridges and have great success. If you fall into that group, don’t take the lack of inclusion on your favorite deer cartridge on this list as an insult. However, if you’re looking for a good stag cartridge recommendation for your first trip abroad, these 5 cartridges are a good place to start.

Let’s get started and go over my choices of popular red stag cartridges that I have seen over the years used effectively and recommended by some of the guides and state forestry agencies that I have had the pleasure of working with.

The .30-06 tops my list for a number of reasons. It was first released in the early days of the 20th century and has proven its reliability for well over a century. It has been used to take the most dangerous games to the smallest antelope around the world and the 30-06 is king when it comes to popularity.

The 30-06 doesn’t have the eye-popping ballistics, but this cartridge is more than capable for stag at any reasonable hunting ranges. The recoil is manageable and finding ammo for this particular cartridge anywhere in the world is a sure bet. Reason its popularity will continue to likely go another century as long as rifle makers continue to make rifles for it and ammo continues to be available for it worldwide.

Any stag guide will be happy to see their hunters arriving to the lodge with a 30-06, especially if it’s a well-worn 30-06 that he or she can shoot well with. Loaded with the right bullet, the .30-06 Springfield is a dependable stag cartridge and recommended by most guides in Europe for any first time stag hunters to bring along. 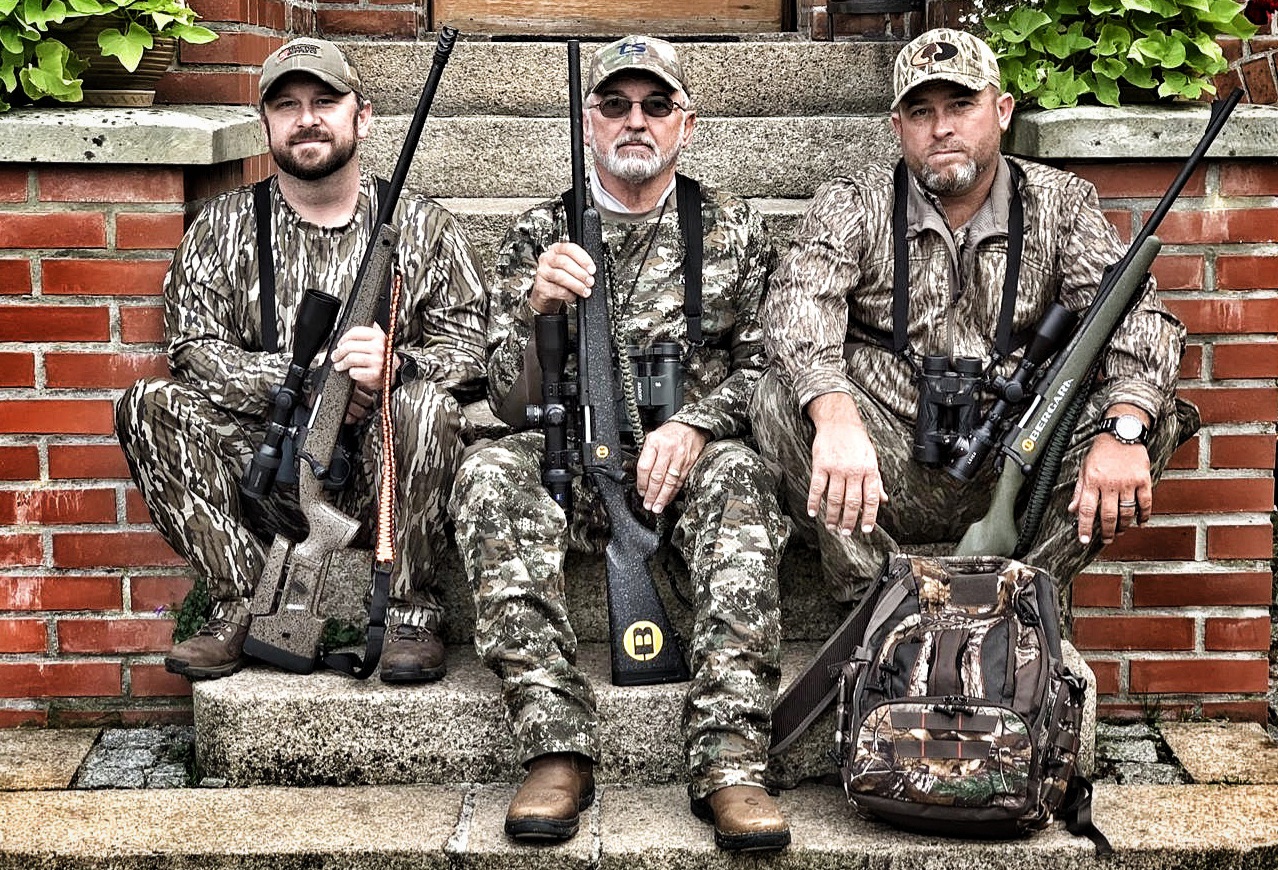 The same cartridges American hunters used for elk are normally sufficient enough for European red stags as long as it meets legal requirements or approved by the forestry hunting authority.

The .300 Winchester Magnum has earned its reputation as one of the most popular magnum cartridges out there. Using the same .308 diameter projectiles as the .30-06, the .300 Win Mag can either shoot the same bullet weight at about 200fps faster, or shoot a heavier bullet at a similar speed. The results are flatter trajectory, with more resistance to wind drift, and more retained energy at a longer range.

With plenty of selections on quality bullets in 180-grain and 200-grain that offer reliable penetration and controlled expansion at any reasonable hunting range, it makes this cartridge extremely versatile for red stag.

Not surprisingly, the .300 Win Mag is extremely popular in Europe and highly regarded as a serious cartridge by most hunters and guides. Those that can handle the recoil and shoot it well enough will definitely put a smile on their guide’s face.

For most hunters and shooters outside the EU, the 7×64 introduced in 1917 and the 7x65R (rimmed version) is not well known, but it is one of the favored rifle cartridges in Central Europe. Similar the .280 Remington, it is highly regarded as a potent Hochwild (high game) cartridge by many German hunters.

The versatility of the 7×64 for hunting all kinds of European game and the availability of numerous factory loads all attribute to the 7×64 chambering’s popularity and success in Europe, especially in its home country of Germany.

The 7x65R (rimmed) shoots the same bullet diameter with lower pressure. It’s used in various double rifle as well as single shot rifle that makes it quite popular with Alpine mountain hunters that prefer a lighter rifle to carry up the mountain.

This cartridge is absolutely deadly on red stag. First introduced in 1962, it didn’t take long for the cartridge to quickly catch on for the North American hunters. The 7mm Rem mag is an incredibly effective cartridge when loaded with premium bullets.

I had an American client awhile back that took this cartridge on one of the hunts in Poland. He was shooting a 175gr bullets, the stag stood broadside at 170 meters and after the shot, it never moved. Rarely have I seen a lot of stag dropped right away, even when hit perfectly by larger hard hitting caliber. Sure some will call it a peculiar circumstance to a normal hunting situation, some games will run a bit and some will dropped, but I haven’t seen a lot of them run when hit by a 7mm mag.

Known for being relatively flat shooting, and retaining lots of energy at down range, versatility is the name of the game with the 7mm Rem Mag. The cartridge is well suited for hunting a wide range of big game at short, medium, and even long range.

As a witness to its performance on numerous occasions, it’s not surprising at all that the flat shooting, hard hitting 7mm Rem Mag quickly caught on with many hunters around the world. And in my opinion and the opinions of many guides, it would be an ideal cartridge to bring along for any red stag hunt.

The .308 Winchester is more than capable for any red stag hunt. Loaded with quality bullets, it provides enough punch at reasonable range to cleanly take a mature stag.

The .308 Win is perhaps the best short-action cartridge for red stag. Just like it’s bigger and older brother the 30-06, the .308 Win has taken its fair share of games around the world.

The .308 is one of the most common cartridges used by many European hunters. It’s at its best when paired with 165 – 180 grain bullets.  Most stag shooting distances that I have experienced from Scotland to Poland to Hungary and Germany have been well under 200 meters (218 yards). At those distances, that’s enough for the .308 Win to cleanly take a red stag.

I have seen more red stag shot with the .308 Winchester than I have with any other cartridges I’ve mentioned, and not a single lost. Some required a follow-on shot, but most were dead on their feet already.

What the 30-06 can do at those ranges, the .308 Winchester can do it with less recoil. It’s one of the favored cartridges for women and those that just don’t like to tolerate a lot of recoil when they don’t have to.

A lot of stags have fallen to the .308 Win loaded with 165 to 180 grain bullets. If you doubt the .308 Win isn’t enough gun for hunting red stag, I hope this will put those doubts to rest.

In closing out this blog, as long as the cartridge meets the required regulations set in place by the country or hunting authority as legal for hunting red stag and you’re comfortable shooting that rifle, bring it! There’s no reason for you to go get a new rifle for a red stag hunt if you have a rifle in one of these cartridges already, but of course, if you love rifles as much as I do, it’s a good reason to research and start looking for that ideal stag rifle.

When in doubt, always check with your guide and host on what they prefer to have you carry on that hunt. If you have any questions relating to this article or any questions at all, feel free to contact me.

Al Louangketh is the Bergara Pro Team manager and international blog editor for Bergara Rifles International. He holds a PhD in Wildlife Science and is a retired U.S Army Veteran living in Germany.

2021 CATALOG WHERE TO BUY CONTACT BACK TO TOP
We use cookies to ensure that we give you the best experience on our website. If you continue to use this site we will assume that you are happy with it.OkNoPrivacy policy