Hunting for the benefits of conservation 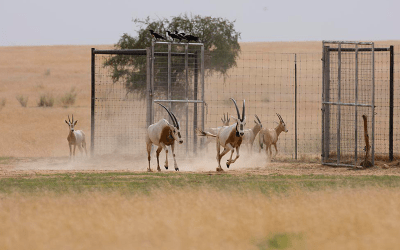 Hunting for the benefits of conservation

By Al Louangketh for the International Bergara Blog

Ask any hunters around the globe and the majority of us would agree that hunting is conservation in itself.  Ask a non-hunter or anti-hunter and you’ll get different answers as to why they opposed hunting or don’t believe that hunting has any part to do with the conservation of wildlife at all. A small percentage of non-hunters and anti-hunters might not admit it but, they also know that a regulated hunt, base off studies and research does play a key role in today’s conservation effort around the world.

This is just facts, people can easily research online and find hundreds upon hundreds of research base off scientific studies that states or mentioned that legal hunting base off the regions research and regulations are beneficial for the sustainment and management of wildlife. 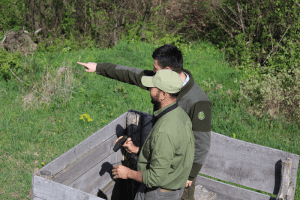 A wildlife biologist and state forestry wildlife manager conducts a yearly survey in Hungary on flora and fauna to ensure that the management system put in place are working for the benefit of the habitat.

Some of these variable regulations are enforced by international policies to ensure that these legal hunts taking place, and within the boundaries of that country’s regulations allowed hunters to take what is needed for them to take, at the same time ensuring that the disturbances within the biodiversity does not cause an imbalance by the means of hunting. This is one of the many examples that non-hunters failed to understand as there is lack of information to the public as to the inner working protocols of conservation people rarely do not get to hear or read about.

Restricting a hunt base off studies and research that otherwise might not be beneficial to hunting if it was to be conducted due to environmental changes, human interference, natural disaster or lack of regulations and control can further deteriorate a population or certain species. Therefore, this can cause a domino effect that can sometimes be irreversible, especially for certain protected species co-sharing that habitat that need such protections during these times of crisis.

The World Wildlife Foundation stated. “In certain limited and rigorously controlled cases, including for threatened species, scientific evidence has shown that hunting can be an effective conservation tool as part of a broad mix of strategies.”  Funding to protect the endangered species or the biodiversity they dwell in is much needed across the globe. Hunters pay! It’s that plain and simple.

One example of hunting and how it has helped an endangered species once on the brink of extinction is the Scimitar-Horned Oryx (Oryx dammah). Once numbered at just 39 animals in the late 1970’s, its home range stretched through the Sahara and Sahel regions of Northern Africa, a vast desert and sub-desert ecosystem that include parts of Algeria, Morocco, Tunisia, Libya, Egypt, Mauritania, Mali, Niger, Chad and Sudan.

Due to over-hunting for this antelope without set regulations back in those early days, as well as civil war, drought and loss of habitat and food because of excessive livestock over-grazing, the Scimitar-Horned Oryx went into extinct in the wild back in early 2000. 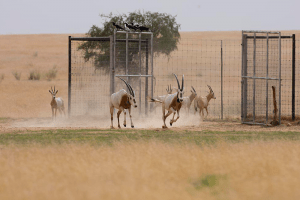 The EAD (Environment Agency Abu Dubai) releasing Scimitar-Horned Oryx back into the wild through reintroduction programs. 53 Oryx were released from various breeders and game farms.

Through conservation and breeding programs at game farms in Africa, Europe and the United States, especially in Texas, a hunting program was put in place for certain farms or ranches with a thriving population to help with funding to further expand these programs. These funding from hunters helped established enough numbers of this antelope to help them slowly get reintroduce back into the wild with the coordination of conservation groups.

Hunting and conservation effort is what saved the Scimitar-Horned Oryx, which is slowly rebounding with over 11,000 animals in Texas alone. Reintroductions back to the countries they once roamed have strict regulations and policies in place, in order to better protect them from lessons learned.

The Government of Namibia introduced legislation giving local communities the power to create their own conservancies and to help manage and benefit from the wildlife on community land, allowing them to work with local and private companies to help create their own tourism, and the majority chose the hunting industry to help not just the declining wildlife population, but also give back to their communities by providing much needed  work, game meat and income for all the permanent and seasonal workers, at the same time, putting values and added protection on the wildlife. 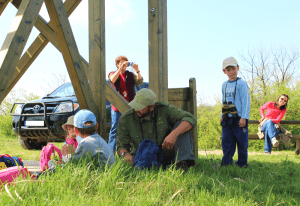 Teaching the younger generations the values of conservation should always be of utmost importance through school programs, organized field days and volunteering your time to get them involved in the outdoors.

Since the government’s legislative support for a community-based conservation strategy, including some tightly regulated trophy hunting, the recovery of wildlife has been remarkable ever since. Namibia now boasts the largest free-roaming population of black rhino, as well as expanding numbers of elephants, lions and giraffes and the world’s largest cheetah population. Local communities have also benefited substantially from the program through work and have a better understanding on the need to protect their resource that provides them those benefits.

This is just two of the many success stories in which hunters have helped improved the declining wildlife population or protect endangered species and helped them rebound to eventually get them reintroduce into their native habitat through coordinated effort with wildlife organizations, researchers, ranchers and willing governments that understand the value of hunting and what benefits it can provide for their country.

The topic of hunting and its pivotal role in today’s conservation effort around the world will always be a debate among conservationist groups, politicians and even our families and friends. Our role plays a big part in all of this and one that is most important to me is that we need to help educate those that are willing to listen, to hopefully help them understand the importance of hunting and what it means for conservation.

In the end, a well manage wildlife population will benefit everyone. The need to protect the flora and fauna through conservation is of utmost importance, whether we agree with the opinions of others or not, it’s our sole responsibility to ensure that the sustainability and protection for our precious wildlife and its habitat is there, for all future generations to enjoy.

Al Louangketh is the International Bergara blog editor and collaborator. Founder and  director of AmmaLa Outdoors, an American company licensed in Germany. He holds a  Master degree in Wildlife, fish and Wildlands Science and Management by Oregon State University and works as a teacher in the Freiburg University in Germany. Ex US soldier, husband and father of two. a.louangketh@ammala-outdoors.de

« Cacciando.com reviews the B-14 Hunter